ABOUT THE BAIL PROCESS IN SARASOTA AND BRADENTON, FL

When someone is arrested and charged with a crime, he or she will either have to post bail or be held in custody until the trial date, which can sometimes be weeks or months from the date of arrest. Bail is a set amount of money that acts as insurance between the court and the defendant. If the defendant is present at all court appearances, then the bail will be returned in full. If, however, he or she skips bail and does not appear at each hearing or trial, the bail will be surrendered. Notable exceptions to this rule include missed court dates due to unforeseeable emergency situations and miscommunication or misunderstandings about the court dates. Should this occur, it may be possible to reschedule the court date and bail will not be forfeited. In the event that the defendants’ bail is paid with a bail bond and he or she skips bail, the bail bond agent has the authority to locate the defendant and surrender him or her to the court.

Before a formal trial, a judge will review the case and set a bail amount, which is usually based on a combination of considerations, including a bail schedule (average bail amounts for particular charges), the perceived flight risk of the defendant, and the defendant’s perceived danger to the community.

Bail is generally at least a few thousand dollars; often, it is tens of thousands of dollars. Bail may be paid in full to the court by the defendant or by someone on behalf of the defendant. Most people cannot afford to post bail, even with help from family members or friends. Furthermore, in some situations bail may be used to cover court fines, criminal fees, and other costs from being arrested. Those who post bail for their loved one usually do not wish to have the bail used for these costs, whereas with a bail bond, the defendant will generally be responsible for his or her own court costs.

Contact a Bail Bond Agent at Bad Boy Bail Bonds, serving Sarasota, Bradenton and all of Sarasota and Manatee Counties, to learn more about the bail process! 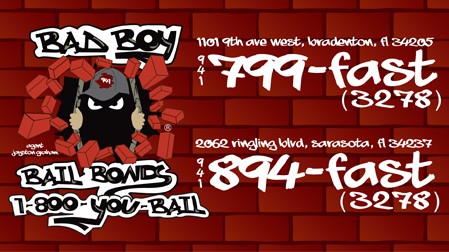 EXPERIENCED BAIL AGENTS ARE AVAILABLE TO HELP 24/7. GIVE US A CALL AT (941) 799-3278 OR FILL OUT THE FORM BELOW.
Play Video about Bad Boy Bail Bonds Video Placeholder

We use cookies on our website to give you the most relevant experience by remembering your preferences and repeat visits. By clicking “Accept All”, you consent to the use of ALL the cookies. However, you may visit "Cookie Settings" to provide a controlled consent.
Cookie SettingsAccept All
Manage consent

This website uses cookies to improve your experience while you navigate through the website. Out of these, the cookies that are categorized as necessary are stored on your browser as they are essential for the working of basic functionalities of the website. We also use third-party cookies that help us analyze and understand how you use this website. These cookies will be stored in your browser only with your consent. You also have the option to opt-out of these cookies. But opting out of some of these cookies may affect your browsing experience.
Necessary Always Enabled
Necessary cookies are absolutely essential for the website to function properly. These cookies ensure basic functionalities and security features of the website, anonymously.
Functional
Functional cookies help to perform certain functionalities like sharing the content of the website on social media platforms, collect feedbacks, and other third-party features.
Performance
Performance cookies are used to understand and analyze the key performance indexes of the website which helps in delivering a better user experience for the visitors.
Analytics
Analytical cookies are used to understand how visitors interact with the website. These cookies help provide information on metrics the number of visitors, bounce rate, traffic source, etc.
Advertisement
Advertisement cookies are used to provide visitors with relevant ads and marketing campaigns. These cookies track visitors across websites and collect information to provide customized ads.
Others
Other uncategorized cookies are those that are being analyzed and have not been classified into a category as yet.
SAVE & ACCEPT